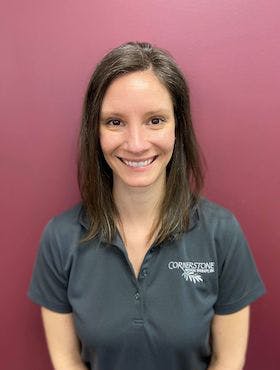 Sonya Anderson graduated from Georgia College and State University in 2010 with a Bachelor of Exercise Science degree and then from Armstrong State University in 2013 with a Doctor of Physical Therapy degree. During her time in school and at clinical placements, she became interested in orthopedics. She practiced physical therapy for 3 years in New York State at a privately-owned orthopedic clinic. After deciding to move to better weather, she began working at Cornerstone Physical Therapy in December 2016. She has developed a focus on the cervical spine and temporomandibular joint, which she continues to expand with Cornerstone

When she is not treating her patients, Sonya is exploring the Asheville area and surrounding parks, traveling, and reading.