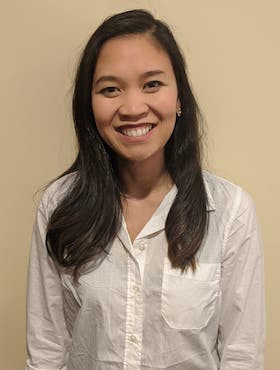 Hanna Trinite is a Texas native who arrived in Asheville by way of Washington D.C. She studied Economics and International Affairs at the George Washington University and worked as a statistical analyst by day and, after getting stir crazy at a desk, she became a personal trainer by night. Her passion for exercise redirected her career course and she went back to graduate school at the George Washington University to earn her Doctorate of Physical Therapy degree. Hanna has since worked with people of all ages with various orthopedic conditions but also has a love for working with people with Parkinson’s Disease to improve their movement and quality of life.

She became increasingly interested in pelvic health and treating pelvic floor dysfunctions when she was expecting her first child. Since then Hanna has completed courses through Herman & Wallace Pelvic Rehabilitation Institute and is so excited to be part of this incredibly important and ever-growing area of care. She now specializes in the treatment of adults and pediatrics with bowel and bladder problems.

In addition to being a certified Yoga instructor, Hanna has dabbled in many areas of fitness including aerial silks, rock climbing, CrossFit, Spinning, and she has completed half marathons and triathlons. She truly loves them all as they have given her the mental fortitude and physical stamina to wrangle both her toddler and her yellow Labrador mix Jalapeño.